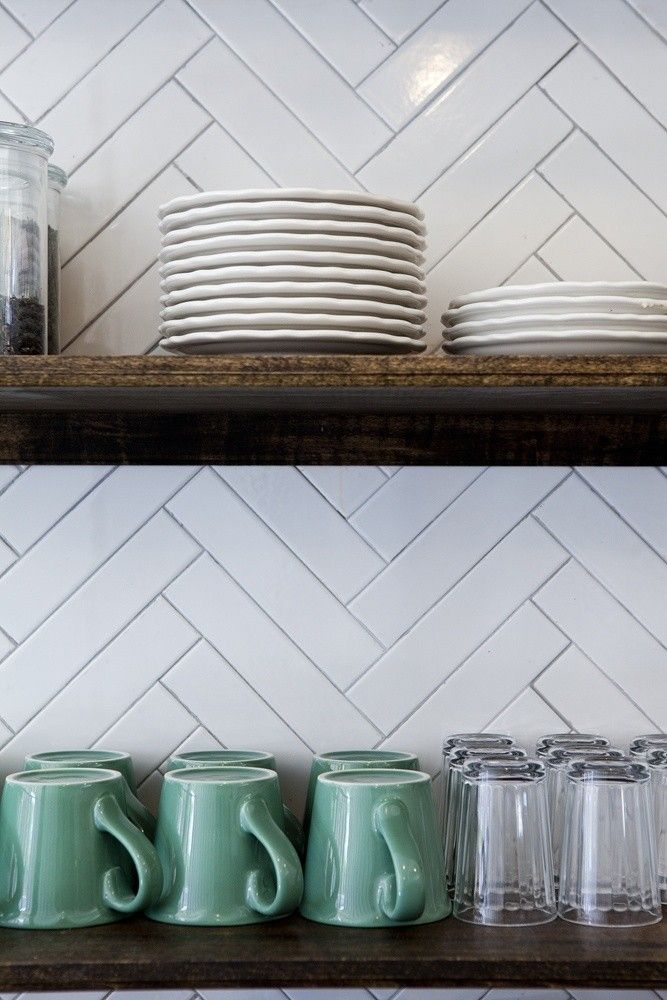 Named after the intricate bone structure of a herring fish, Herringbone is a classic pattern that has reached all facets of design.  Herringbone patterns are often used in interior design, and can be found in almost any design element–A rug, your favorite throw pillow, wood flooring, curtains, and our favorite–tile.  Whether you're working on a bathroom floor or a kitchen backsplash, herringbone tile adds timeless character to any design.  Below are 7 of our favorite ways to get creative with herringbone tile in the kitchen.

If you're a sucker for classics, Herringbone in a simple white tile color and a crisp white grout line is your best bet.  Although this look is commonly seen in traditional kitchens, it works just as well in contemporary and modern designs.  Choose a classic 2 x 4 or 3 x 6 size for a traditional look.  Or try a 2 x 8 size for a herringbone pattern that shows off its wild side. 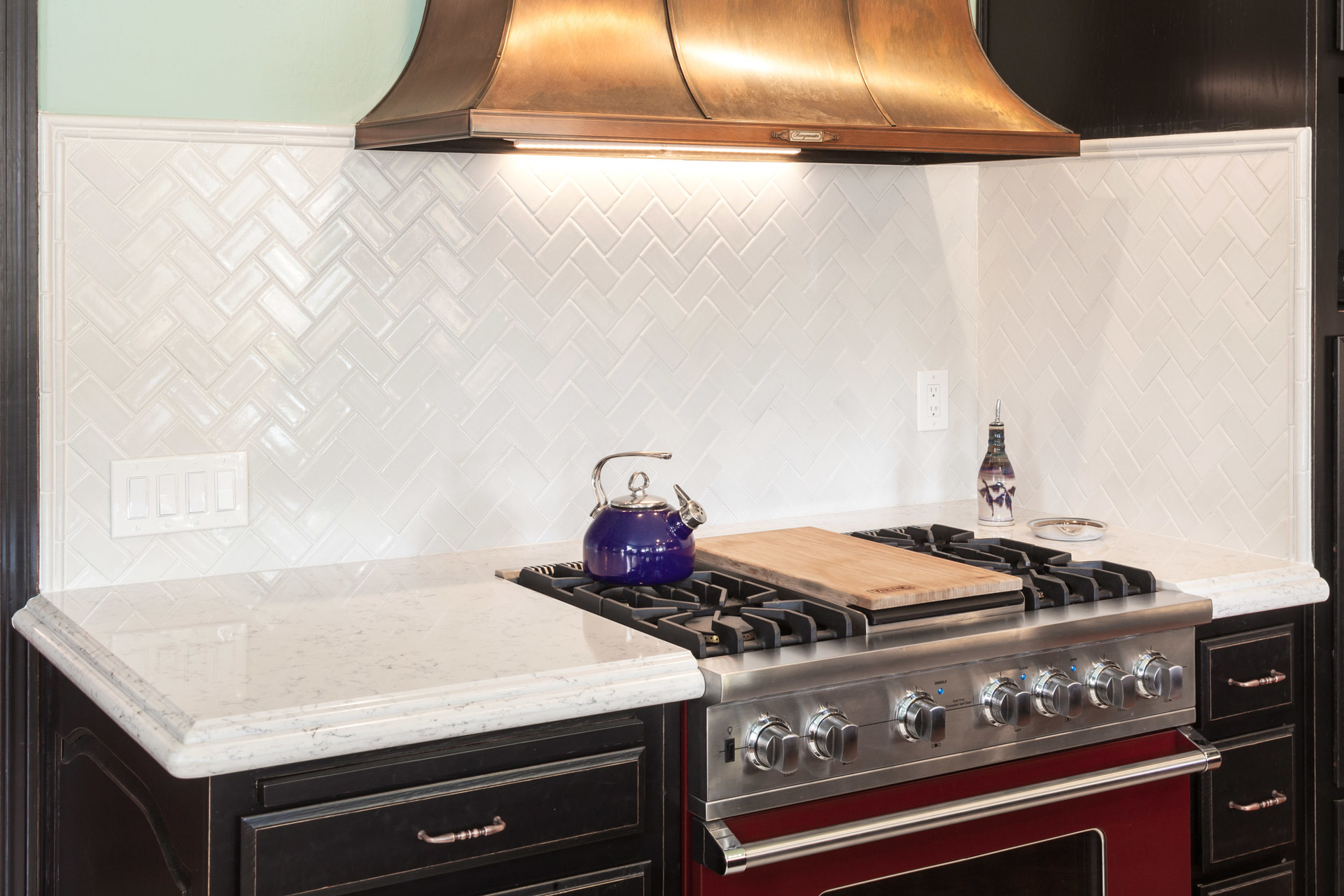 For a more contemporary look go for a slightly cooler neutral, such as a light gray.  This color tone works well with any design style, however we think it looks best in contemporary kitchens.  The kitchen below chooses a misty gray hue in a sleek 2 x 6 size.  Paired with fresh white cabinets and stainless steel details, the space feels clean and contemporary with just the right amount of texture, dimension and personality. 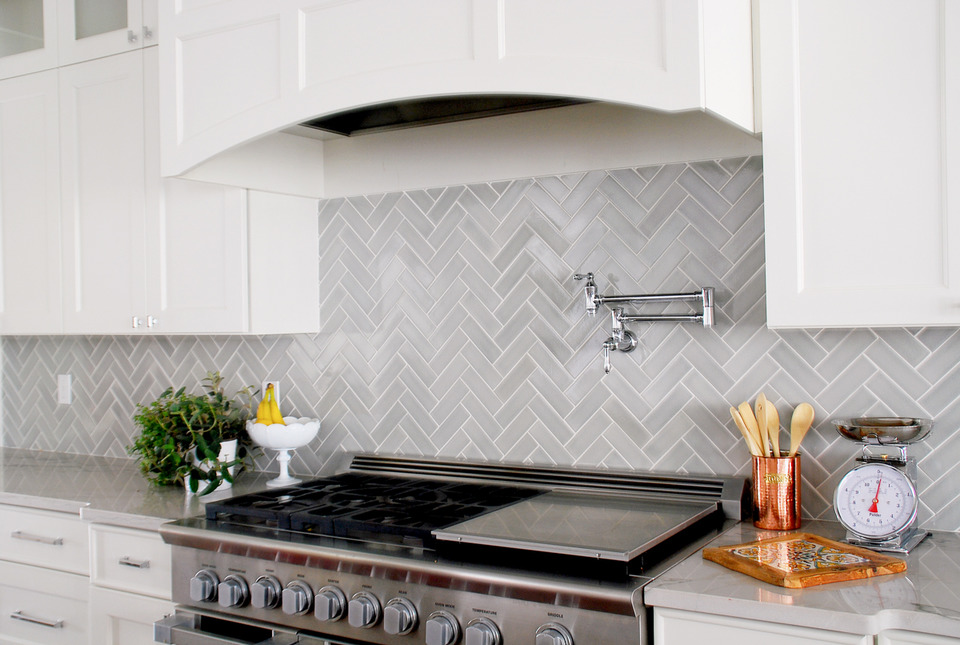 Despite its traditional roots, a herringbone tiles kitchen can go modern in a heartbeat.  Simply add a dark moody color such as a charcoal gray and contrast it with a lighter grout line.  The color will make the layout feel modern while the grout line emphasizes the overall herringbone pattern, adding graphic appeal to your space. 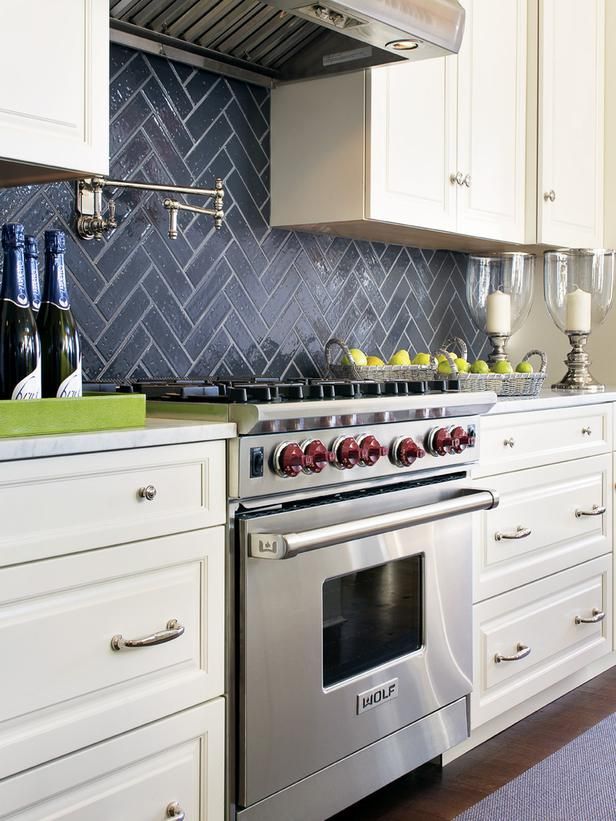 Herringbone and color were meant for each other.  Well, we think so at least!  Although the pattern is often seen in neutrals, it works just as well as a vibrant pop of color in your kitchen.  Try a refreshing splash of blue the way the kitchen below has done with a herringbone accent bordered by a classic off set pattern.  The rest of the kitchen remains neutral, allowing the tile color and details to become the focal point of the space. 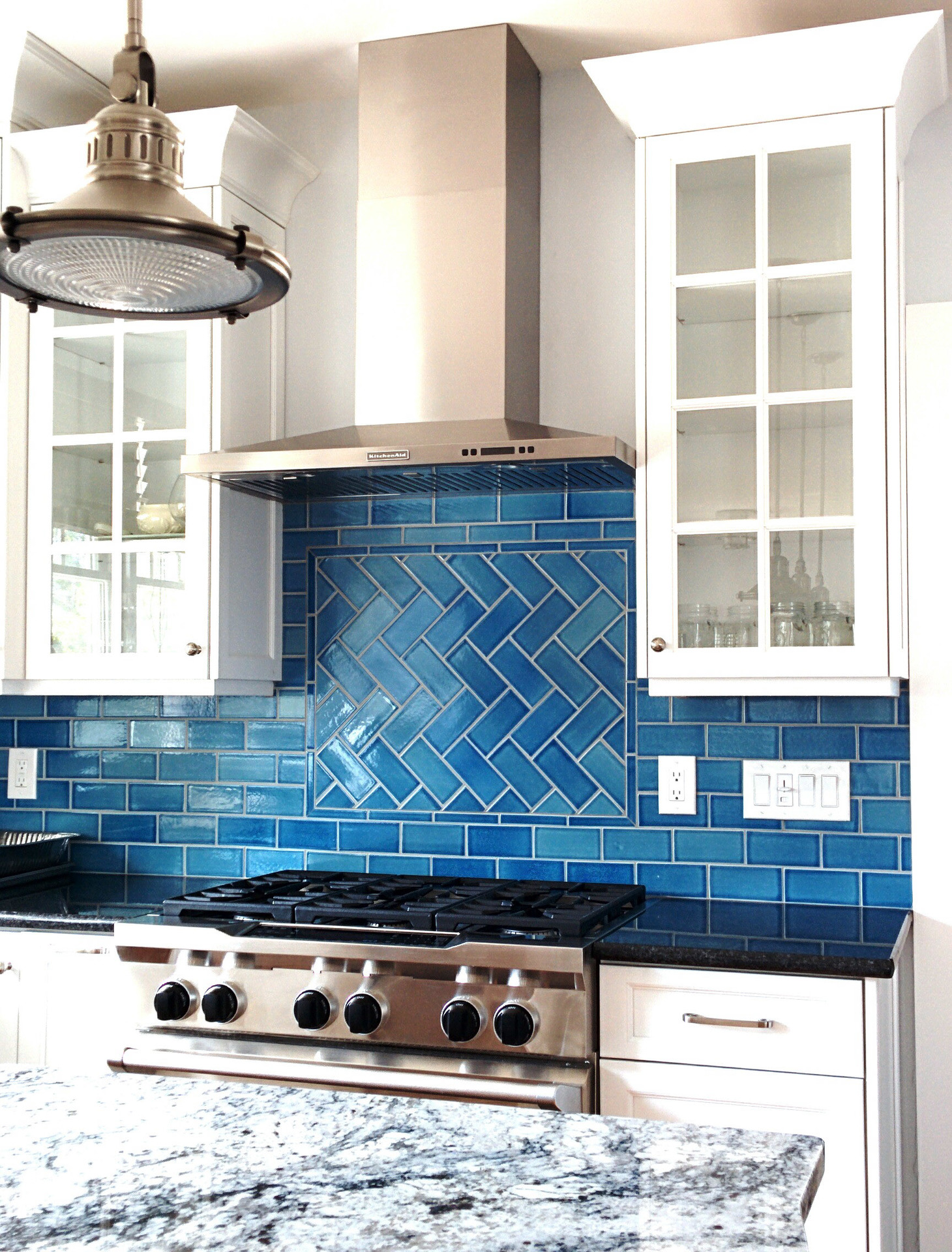 Tired of the traditional herringbone layout?  Flip it!  By laying your herringbone tile backsplash in a vertical arrangement you create an effortless contemporary aesthetic.  Try the layout in a 2 x 6 or 2 x 8 size to elongate the pattern, making it feel even more contemporary.  A vertical herringbone is the easiest way to add a fresh design element to your kitchen that doesn't feel overdone. 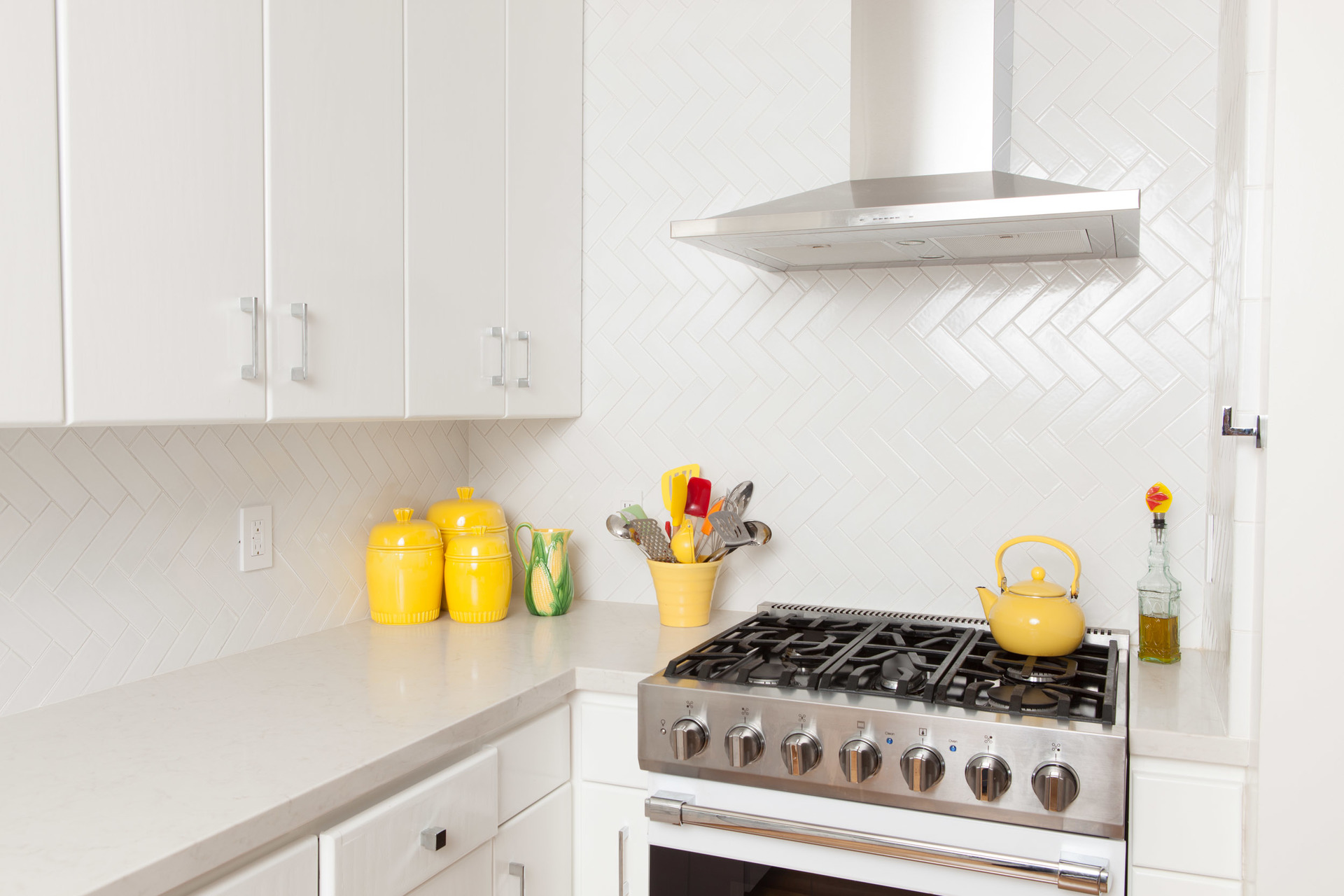 A large tile size can have major impact in a herringbone pattern, and the great thing is you won't need as much tile to cover your backsplash!  For a modern take on the traditional pattern, try a herringbone backsplash in our 3 x 9 EDGE size.  The neutral, matte color palette and the large format size makes EDGE a worthy contender for your next herringbone tile project. 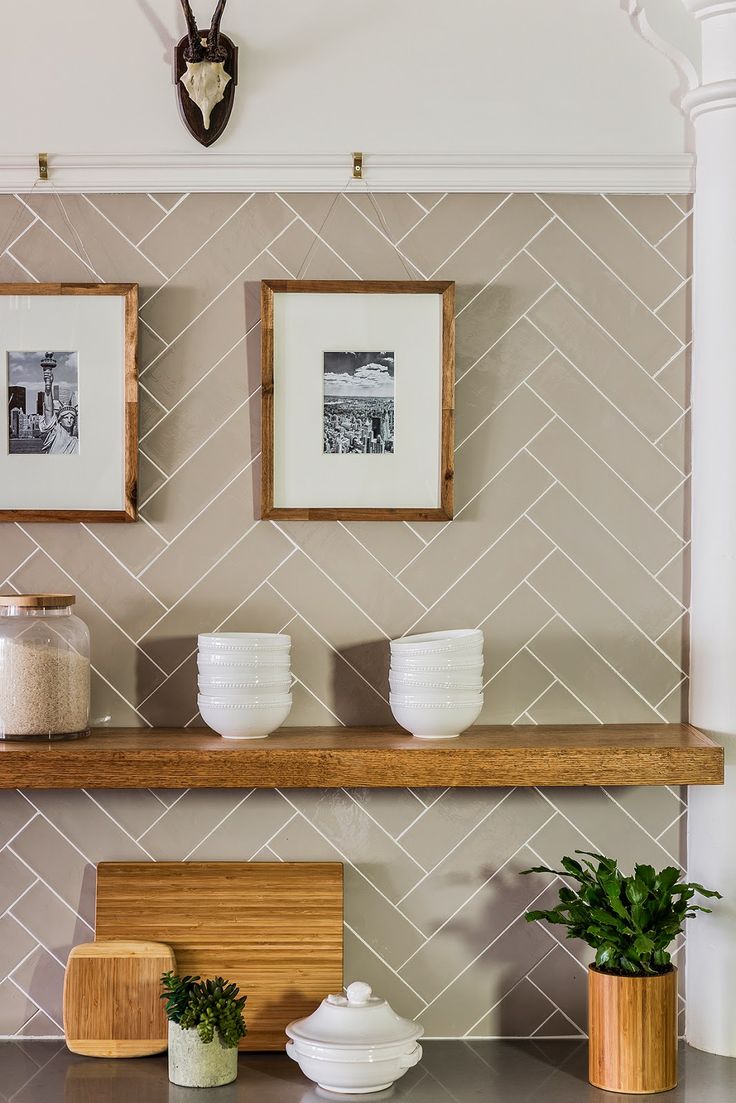 Herringbone isn't only for kitchen walls and backsplashes.  The classic pattern is a familiar choice for kitchen flooring as well.  Lean toward the traditional side with a standard size in a neutral color, or go for a more dramatic look with EDGE in our 3 x 18 size in a deep gray hue such as in the kitchen below.  Our glazed thin Brick also works well on the floor in a herringbone layout. 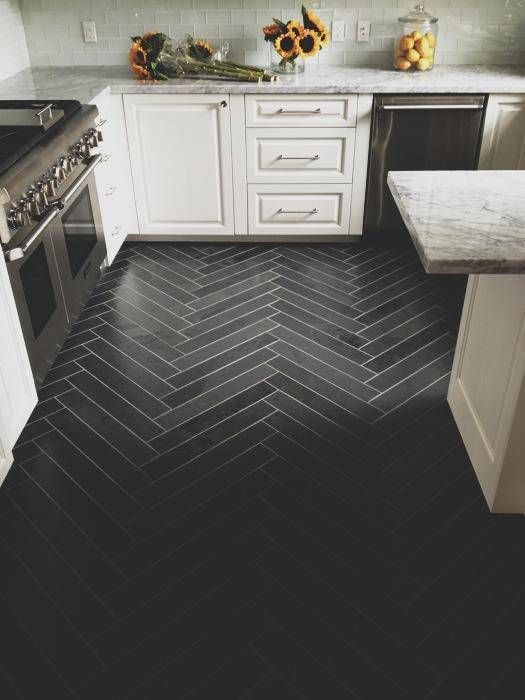 Love this look? Order free samples now.  Need some help?  Simply call, chat, or fill out our Design Assistance Form and one of our talented Design Consultants will get back to you shortly.