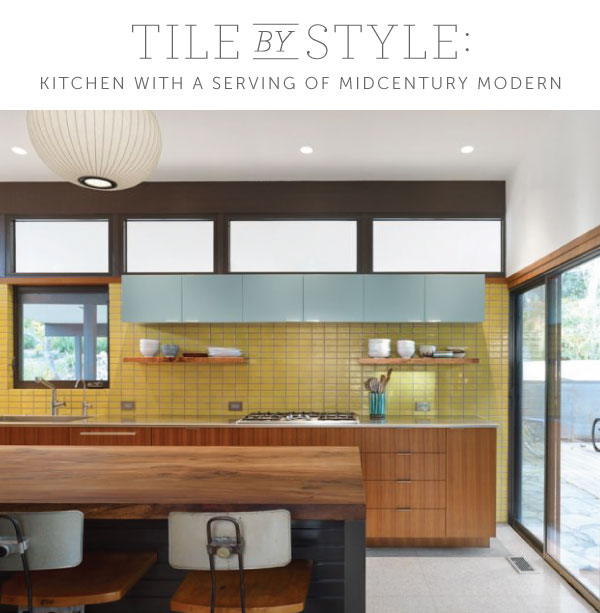 If names like Knoll and Saarinen get your heart racing or if your drink of choice is a martini, you’ll doubtless love Mid Century Modern kitchen tile. But even if none of these ring a bell, chances are you’re no stranger to this iconic design style that’s come back today in full force.

Making waves around the 1930s and reaching the height of its popularity in the 1960s, the staying power of Mid Century Modern design is rooted in nostalgia while still feeling fresh and new. Mid Century Modern architecture is an eclectic mixture of Frank Lloyd Wright’s organic architecture, the Arts and Crafts movement, and the International and Bauhaus movements. Taking various elements from these movements such as the truth to materials, simplicity in form, and transparency in design, it also incorporates trends of the period like bright colors, bold patterns, and “modern-day” (at least for that time) amenities to achieve an aesthetic that is both contemporary and eclectic.

In order to create a strong relationship between the indoors and the outdoors, Mid Century Modern homes will feature floor to ceiling windows and open floor plans to create a seamless transition between the home’s interior and exterior. Held up by post and beam structures, the home will be topped with low sloping gable roofs that appear to echo the surrounding landscape. 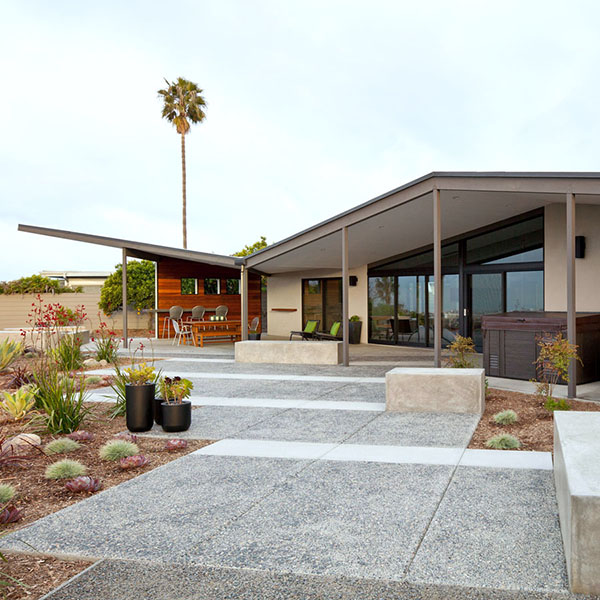 A blend of industrial building materials and natural elements common in the Arts and Crafts movement are frequently found in Mid Century Modern exteriors and interiors. Exposed steel beams, sheet metal walls, concrete slabs, and stone foundations might comprise the exterior, while wood floors are finished to highlight the natural beauty of the grain. 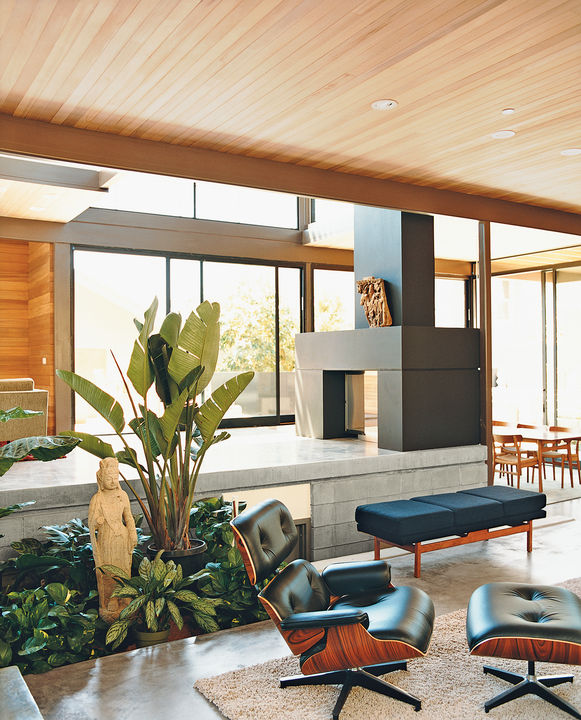 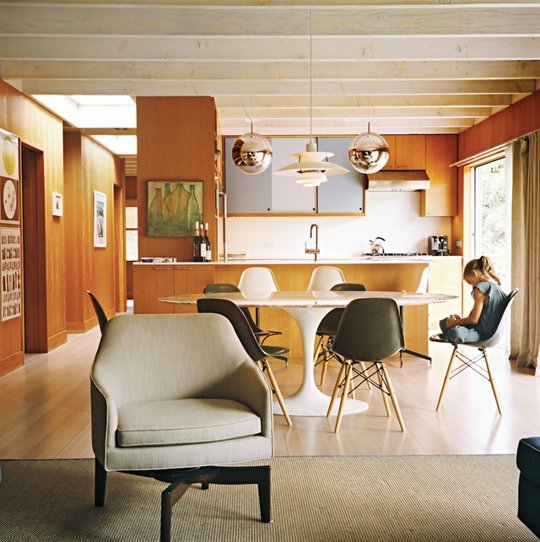 There are a variety of ways to put your stamp on Mid Century Modern kitchen. Despite Mid Century Modern’s sleek lines and minimalist details, its beauty lies in its versatility. By mixing in a hint of pattern and a splash of color, a beautiful mid century modern kitchen tile installation can incorporate just the right amount of retro flair while still staying true to the iconic design’s core principles.

What’s Mid Century Modern without a little mod-inspired funk? When it comes to color, really anything goes. Kitchen backsplashes are the best place to showcase our personality, especially when it’s contrasting with seamless, unframed cabinetry. 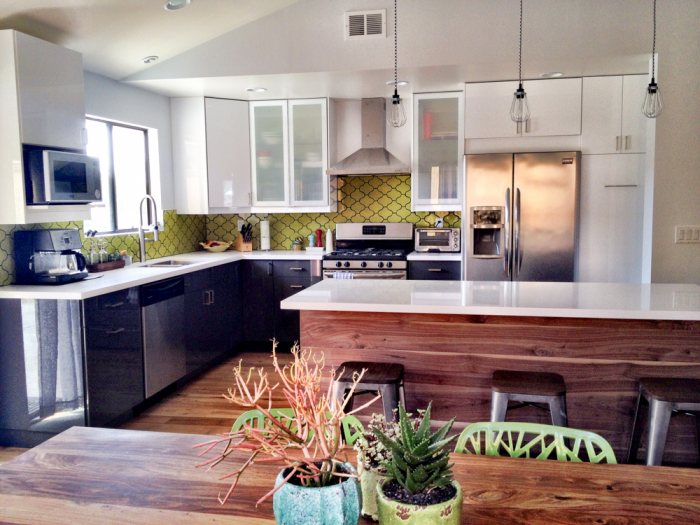 This kitchen’s tile takes up an entire wall. A light blue hue tones down its textured patterning, while a white, square tile floor keeps it the look anchored. 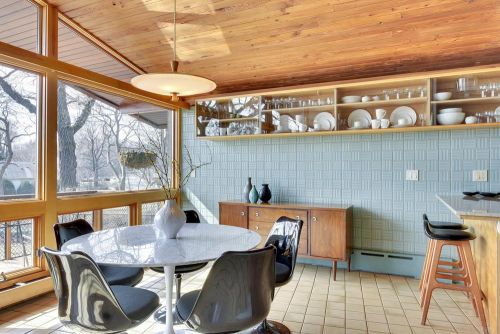 For purists who want to stay true to Mid Century Modern’s sleek and streamlined aesthetic, a straight set design maintains order and echoes modular silhouettes. An extension of the surrounding cabinetry, this kitchen’s white backsplash feels like an extension of the straight lines found throughout the home. 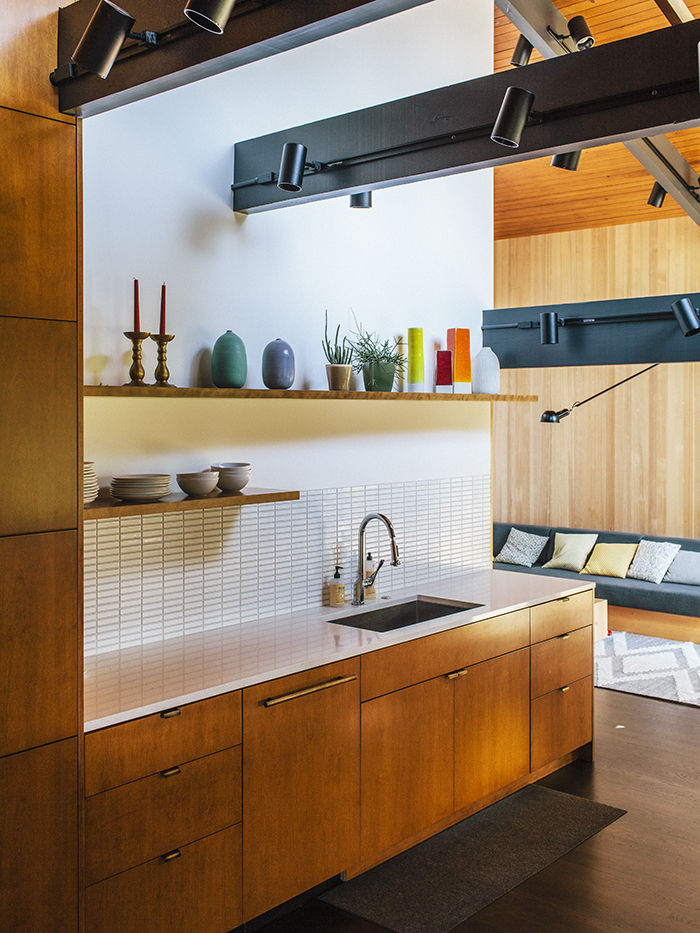 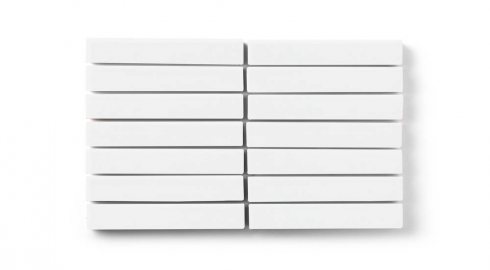 A splash of color can lighten the mood and keep a Mid Century Modern kitchen from feeling too rigid. We love how our tile in Daffodil brings a sunny air to this sleek space. 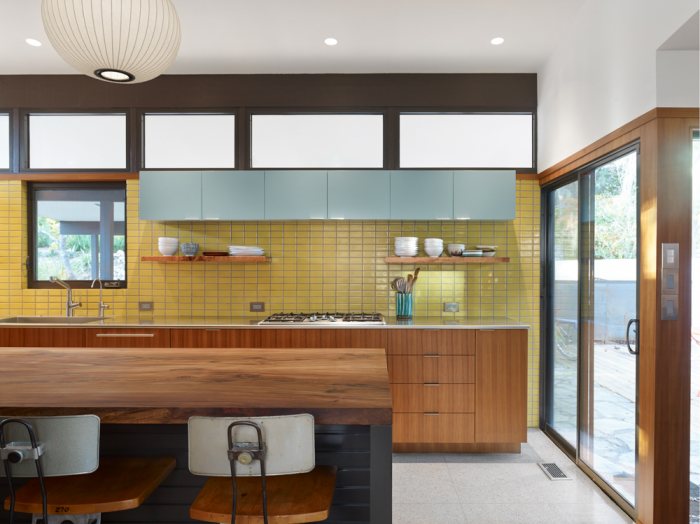 Straight set can also come in different shapes like squares. Here, it accentuates the retro look of this vintage-inspired kitchen without feeling dated. 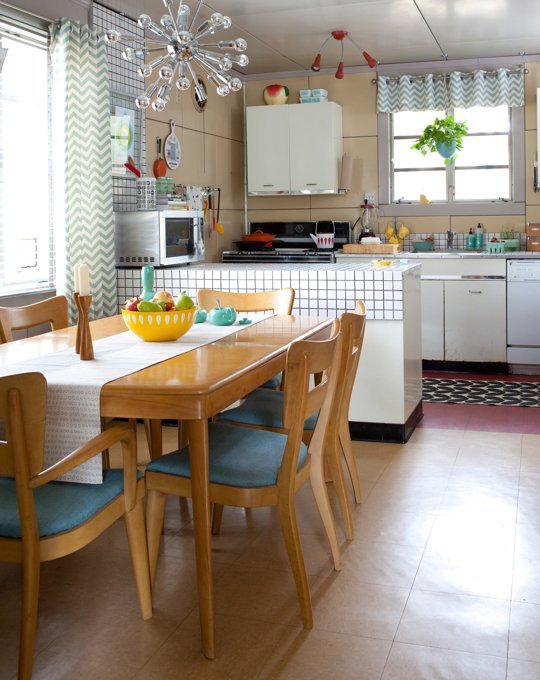 Reminiscent of Piet Mondrian’s signature grid-like paintings, mosaics feel right at home during the Mid Century Modern era. Try our Crush It! Custom Blender to create your own custom palette.

A backsplash filled with longer and thinner tiles in a neutral palette creates soothing, ripple effect in this updated Mid Century Modern kitchen. 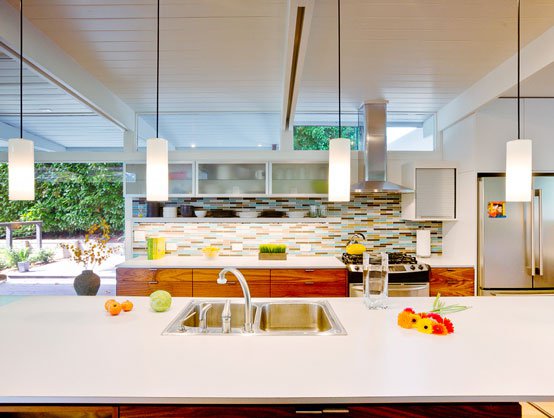 Graphic design took an innovative turn from the 1930s onwards, and its influence can be seen in Mid Century Modern’s bold shapes and high-impact hues. So don’t be afraid to hold back when it comes to pattern and color--you’ll be staying true to Mid Century Modern style while breaking up the straight lines that dominate its structural elements. 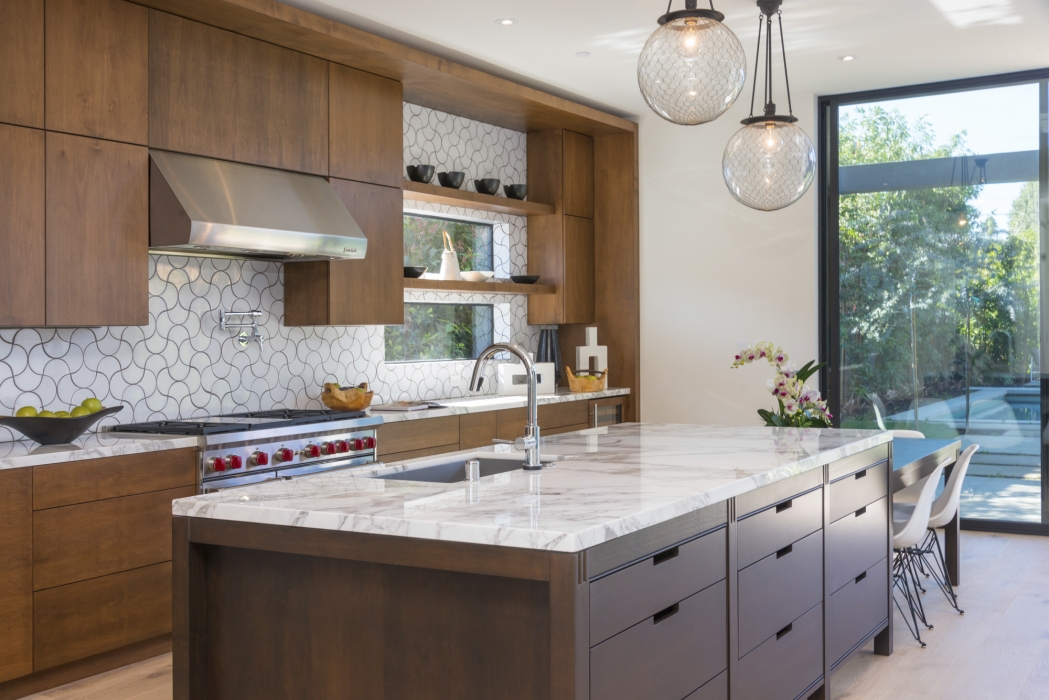 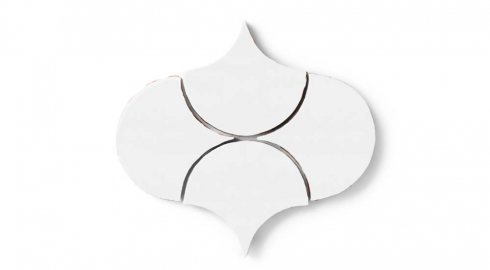 We love how this Escher pattern in blue simply pops against the kitchen’s neutral cabinetry. 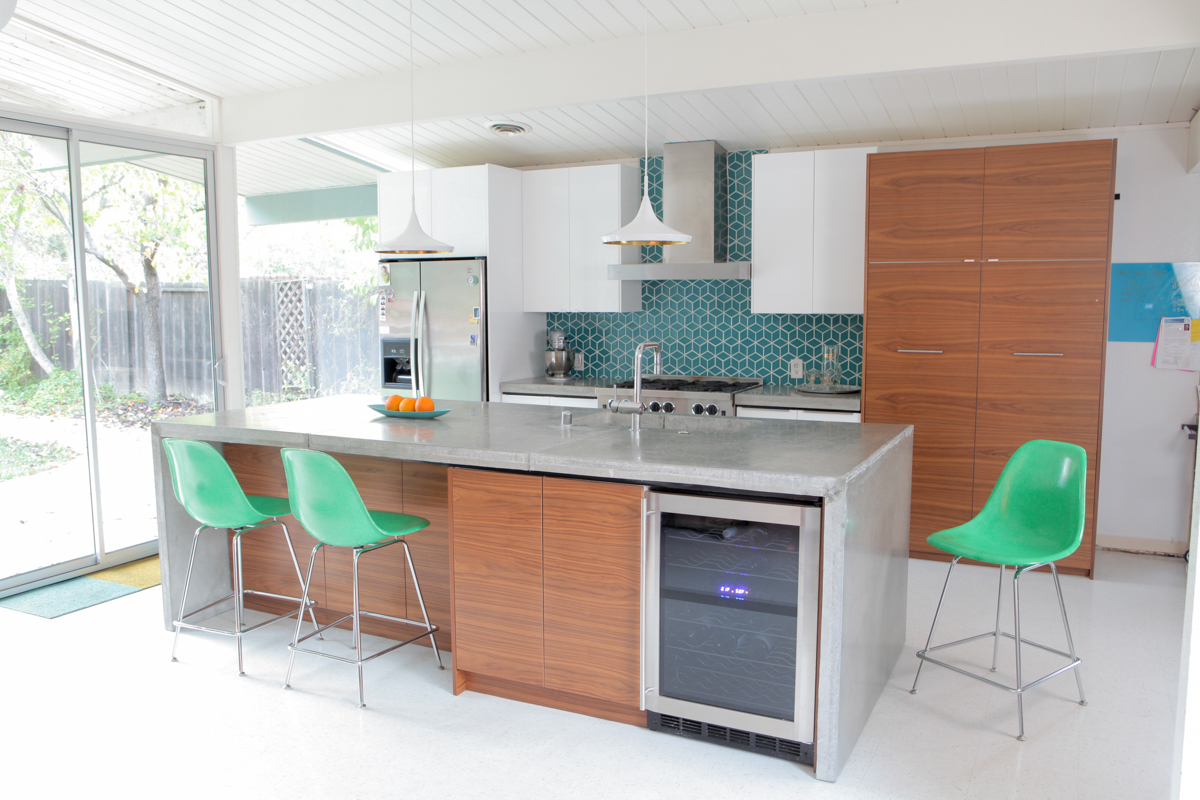 With backsplashes making such a big statement, you’ll want to keep things rather calm underfoot. Our EDGE Series features large format tile with a precise rectified edge, creating clean and tight grout lines that are great for flooring and anchoring your space. 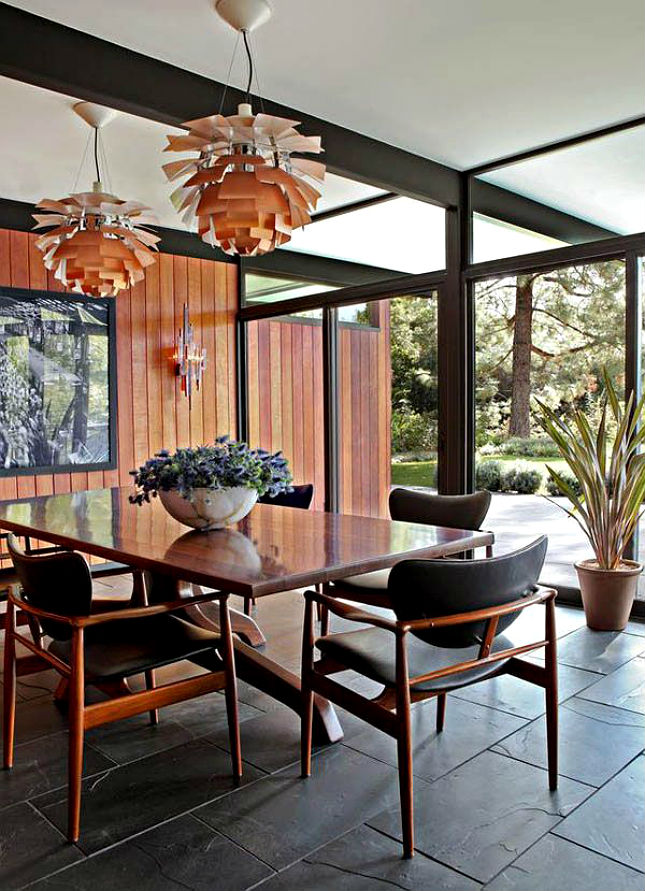 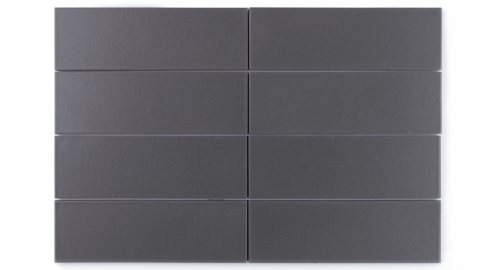 Ready to order tile for your Mid Century Modern kitchen?  Order free tile samples now.  Need some help?  Simply call, chat, or fill out our Design Assistance Form and one of our talented Design Consultants will get back to you shortly.