An Idea Takes Shape for the New Milpitas BART Station 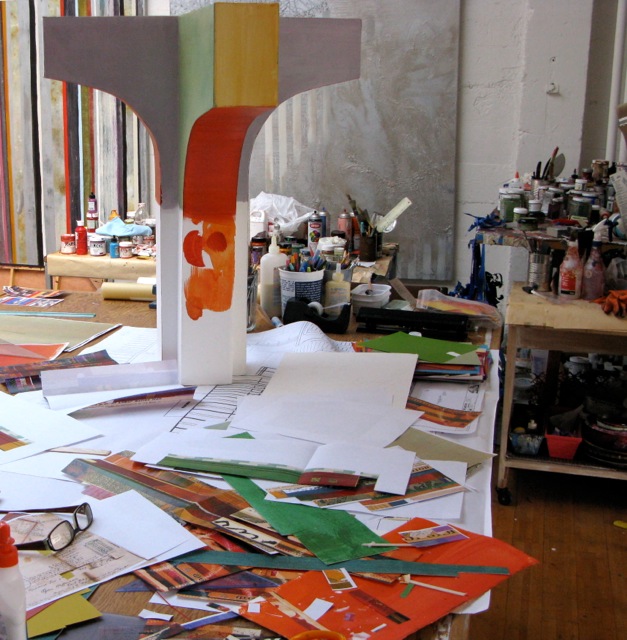 Model of a column being made for the Milpitas BART station

The Milpitas BART Station is on its way to becoming a reality. The longest in length, this station will be the main transfer point between Oakland and downtown San Jose, CA.  We couldn't be more thrilled to be a part of it, and over the next few weeks we'll be sharing what it takes for a company like ours to collaborate on a custom project of this magnitude.

We were brought onboard the BART project by local San Francisco artist, Amy Trachtenberg, who has been awarded a public works commission to create an art piece for the station, which she has named, 'Ecstatic Voyaging'.  Drawn to the monolithic columns throughout history, she chose the underground columns as her canvas, and tile as the ideal cladding. Working in the earliest design stage with VBN, station architect, Trachtenberg reshaped the structural columns into a ziggurat form to provide a solid geometry for her tile concept. 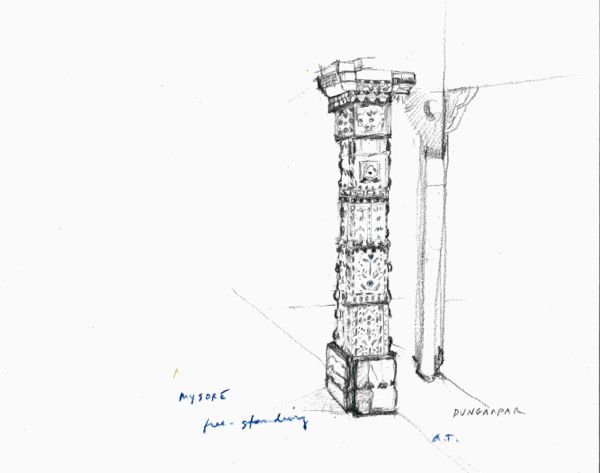 Above, a beginning sketch, an idea takes hold.

Trachtenberg had Fireclay Tile in mind as a partner from the beginning.  Our founder, Paul Burns, was on her radar and she was eager to investigate. Initially the beauty of our product was the magnet, but several other factors convinced Amy to choose us among other Bay Area tile makers.  Trachtenberg was deeply impressed by Paul’s various areas of expertise in the craft of ceramics and tile making.  "While the local and historic underpinning to the company’s history was a factor, I was blown away by both the overall ethos of the company and innovative means of advancing recycling into the Fireclay process. The factory setting was in proximity to my Santa Clara Valley station project making for less of a carbon footprint when fabrication and installation were to take place," she says. 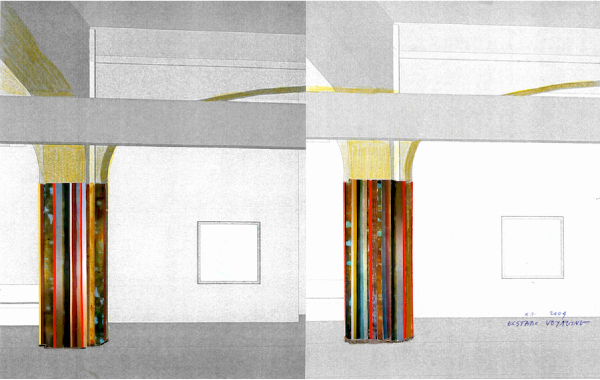 Trachtenberg imagined a crossroads and jewel-like station with a flow of tile ornamentation on the twenty freestanding columns with a colorful glazing of the overhead concrete arches connecting the pieces. The timeless material of terracotta tile on innovative forms would reflect a palette traditional to transit stations. The ceramic glazing techniques would be two-fold, employing screen printing and the sense of the artists 'hand'. 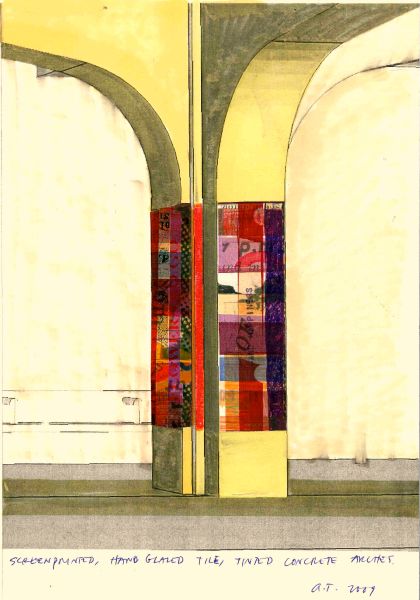 "Paul's willingness to troubleshoot and allow broad but systematic experimentation with my project ideas has been unparalleled.  In early tests of collaging with screen prints onto the tile, I began to arrive at ways to use historic patterns from Fireclay's studio to incorporate with my larger original patterns," says Trachtenberg. 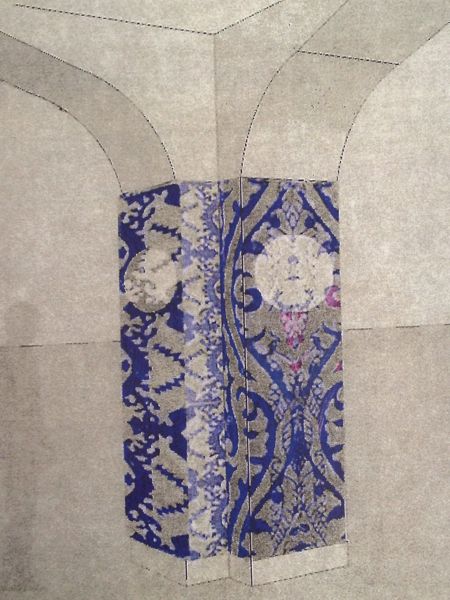 Over time, images are enlarged, edited, dropped and exchanged as the final design begins to emerge. 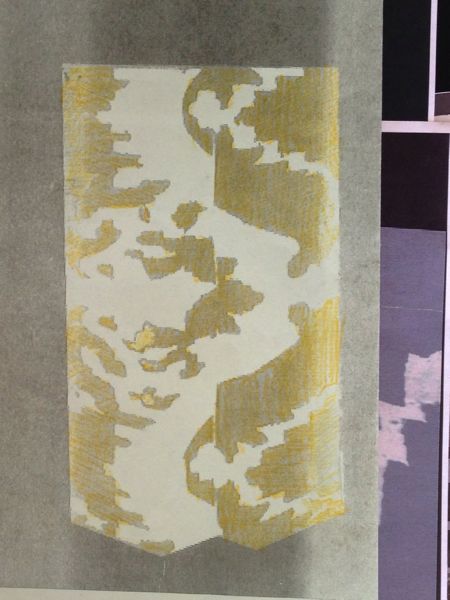 Finally the scale of the pattern is set. 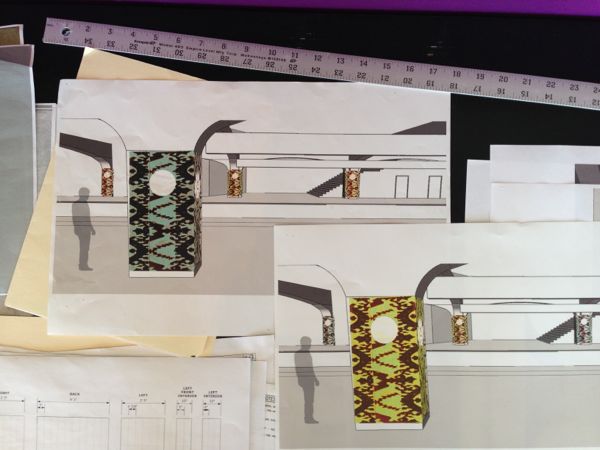 “Ecstatic Voyaging” is more of an experience than an object.  Borrowing from the language of textiles and patchwork, the art piece is a view of overlapping worlds as the twenty polychromatic columns build a singular flow of bold patterning. Reading on multiple levels, the artwork is reflective of both the cultivated and natural landscape of Santa Clara Valley, a metaphor for the various histories and cultural overlays of Milpitas, a city in transition where twenty-six languages are spoken. The passenger in the moving train will be struck by the surprise of color and surface of the ziggurat shaped columns. The tile medium will both sparkle and perform with the durability well known in ageless architectural wonders as The Alhambra in Spain and The Topkapi Palace in Istanbul," says Trachtenberg. 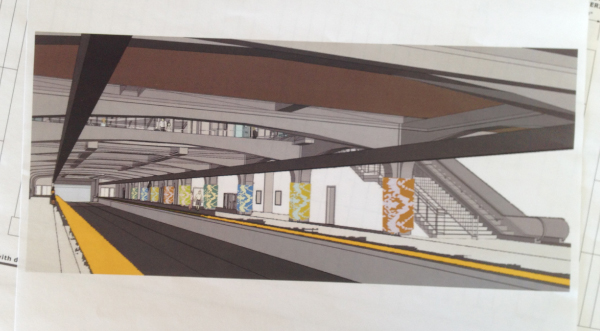 A lot of thought goes into the image viewed close up verses from a distance, the feeling a traveler will have waiting for the train, as opposed to the visual they will get as a passenger as the train moves in and out of the station. The idea is ready to become reality at the Fireclay factory.